The Enterprise version allows you to export your account data in different formats for later use. We present you the different possibilities of export in this article

How to export data from a predictions contest 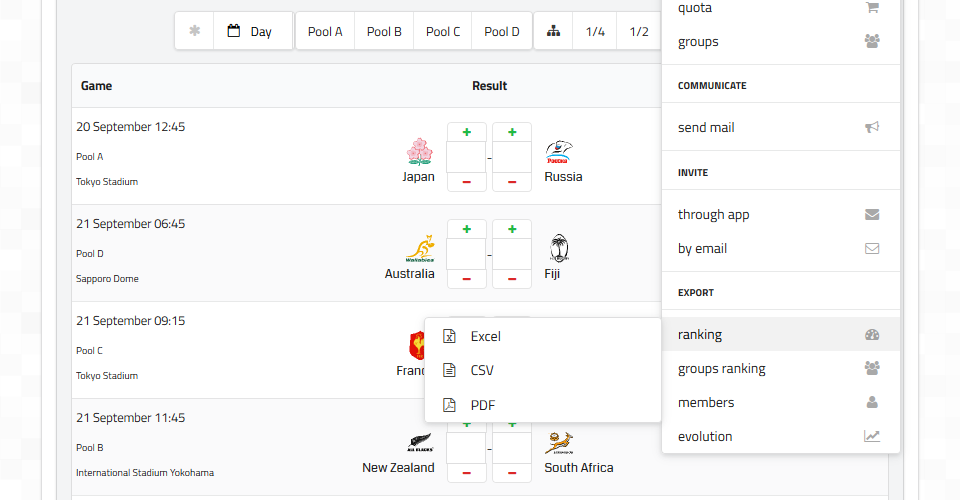 To export your Enterprise account data, go to the contest page, and select the Actions menu. The different possible exports are presented in the "Export" section. When you hover over one of the elements, the different formats available for this export appear. Click on one of them to proceed with the desired export.

For instance, exports can be reused for internal display, data backup, or to be used to reproduce graphs and analyzes.

4 types of export are possible, each having its specificities and its utility:

All types of export are available in at least two formats: Excel (2007 or higher) and CSV. If you can, prefer the Excel format, which is ready for use. If you do not have a compatible software, downloading the file in CSV is a good alternative. CSV files are text files prepared specifically for import into a spreadsheet.

Finally, it is also possible to export the individual ranking and team ranking tables in PDF format. In this case, if your contest involves a large number of participants, the file will be paginated, so as to contain the entire list of participants.

Did you find this article useful?
4.7 on 16 votes
Managing contest membersAdding a connector
Vote added. Thanks!
By continuing your visit to this site, you agree to the posting of cookies on your browser and the use of cookies for audience measurement purposes in order to improve your user experience.
OK